The train station is on the level -1 of the airport. The service “Brussels Airport Express” proposes several departures per hour to Brussels Midi.

There are also connections to Lille which instead of Brussels Midi pass through Gent (Gand), Kortrijk (Courtrai) or Tournai (Doornik).

It is better to buy your ticket in advance on flibco.com. Expect to pay between 5€ and 17€ (half the price of that purchased from the driver).

It is also possible but takes longer to take the bus TEC between the airport and the Charleroi-South railway station (20min, ~5€) and from there a train to Lille via Tournai (1h40, ~20€). Some of the Tournai–Lille trains stop at Ascq. It is possible to reach the campus in 20-25 minutes by walking through the town.

It is also possible, but takes longer, to take a train to Lille via Tournai (1h40, ~23€). Some of the Tournai-Lille trains stop at Ascq. It is possible to reach the campus in 20-25 minutes through the town on foot.

It is recommended on the Eurostar website to be at the station 40 minutes before departure.

It is also possible to go to the Paris-Nord railway station by metro RER-B and then to reach Lille by TGV. This takes longer but connections
are more frequent.

Alternative solution: take a bus Orlybus to Paris, get off at Paris at the “Denfert-Rochereau” station and then take the metro RER-B to the “Gare du Nord” station.

Take the shuttle that arrives directly to the railway stations (20min, ~8€).

To join line 1 from the station “Lille Europe” by foot you must follow the signs “Gare Lille Flandres” and not the signs “Metro” which lead to the line 2 station. It is also possible to take line 2 towards “Lomme Saint-Philibert” for just one station (in case of rain, for example).

Then take Line 1 (yellow) towards “4 Cantons Stade Pierre Mauroy” (1,60€/ride + 0,20€ rechargeable card).
Get off (after 12 minutes) at the “Cité Scientifique Pr Gabillard” station (it’s the second to last station). This station is inside the campus. 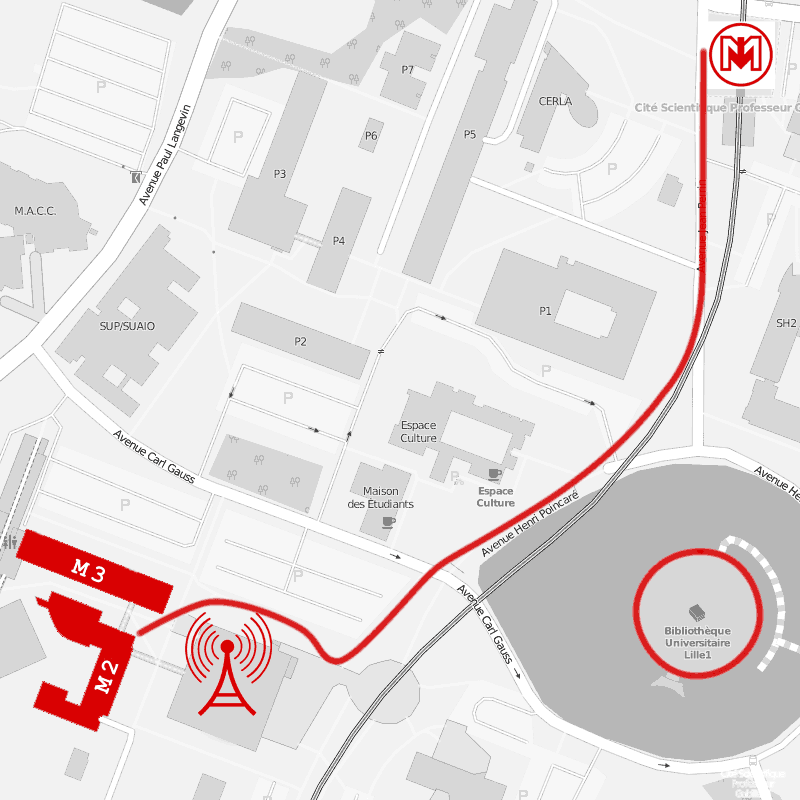 Walk along the metro (skytrain here) towards (south) the next station (“4 Cantons”) until the large cylindrical building (the University Library) appears on your left. At this point you should see the M1 building on your right recognisable by the large radio transmission antenna on its roof.

Paul Painlevé lab and the Math department occupy two buildings, M2 and M3, which are located just behind the building M1.